Well done. Step by step we have come to examine structure of person’s functions in detail, or, in another words – energy-informational human’s framework – set of basic States.

For any functions activities, be it weight lifting, conversation or reasoning, there energy is required, besides it must be goal-directed, that is informational-modulated. Possibility and quality of work’s performance is defined by States of person. Our states – various energies – define our abilities to function with seeking certain powers, creating potential difference in relevant energy range.

There are mark outs six kingdoms in biology: animalia, plantae, fungi, protista, archaea, and bacteria. For analysing energy-informational system we will use next classification of lives: minerals, plants, animals, and humans. What common did they have, and what are differences between them? All they have certain exterior Form, solid body, and, of course, energy, that creates and maintains this form and its structure. Plants, animals and humans are capable to feel external actions, stir and act – to perform Deeds. Energy of deed’s performing makes possible to change body’s form, to execute body control. Animal and human are capable to think and create Situations – to do goal-oriented set of actions. Compare simple deeds of coming out flower on morning and complex system of bird’s actions for nest building. Human have ability consciously tasking, analysing and generalize results.

Only human because of energies of Consciousness can purposefully to change oneself. By the look of how often person forget about this object and how hard it is given, apparently, his not long ago start to learn. “It seems that most important work in the world – it is work at something visual: build house, plough, feed cattle, crop; but a work at oneself soul, at something ‘invisible’ – it is unimportant deed that may do and may don’t. Meanwhile, only one this deed, working at soul, at the becoming with each day better and kindly, is true work; and all other works, outer, helpful only when this main work at soul performs”, – note Leo Tolstoy in “Circle of reading” (also in collection “About truth, life and behaviour”).

By comparing outer forms of specimens and its behaviour, a conclusion comes to mind about evolution and structure of bodies. Minerals have inflexible form that may be changed only by exposure of rough external factors. Plants are receptive for more fine external factors, their forms supports certain actions (turn to some side, open and close petals, grow). So, energies of forms evolved and created more flexible and pliant inner structure, but process of movement and creating situations belonged to external factors. Animals evolved to moving in space and effecting to other objects. Form’s structure became more rigid because of skeleton, more flexible because of muscles, and obedient to will because of complex nervous system. Ability to perform action also evolved and allowed energy of Situations to realize itself. Developing of Situations, on one’s part, made possibility for animals to create goal-oriented set of actions according to simple thoughtforms.

Different level energies follow laws of processes’ interaction: for realization of Situations there must be done some Deeds, for deed’s realization there must be Form involved – a body that corresponds to deed. High level energies leverages with modulation of lower level energies – it seems like tasking from director to manager, from manager to worker. Lower level is instrument for higher level. Here more one deduction – abilities of higher levels depends of abilities lower levels: try to do something, if you haven’t proper tool. For example: how wonderful pianist will play piano without piano; or how excellent soccer player will play without ball?

Next-level energies of Consciousness, that become apparent of human, not only provided ability to create instruments, but, most importantly, become to define direction of using it – for good or for evil. Animals act under effect of some external process is called with mysterious word instinct, while humans because of right of free will and responsibility for choose, learn to act consciously. Owing to it we have structure that is called socium; and a process of awareness of different socium’s spheres of functioning we called socialization. There is always must-choosing action, and person try to formulate “what is good and what is bad” while analysing results of actions.

Consciousness’ energies provide ability to abstract thinking, creating and concretize composite thoughtimages, and control energies of Situations. Energies of Consciousness have different Levels1 degree of complexity. Complex image is formed on higher level. Than it divides to details – more simple images are formed by lower levels of consciousness. Situations in accordance with simple images beget sentiments and make out complex of deeds; energies of Deeds actuate Form bodies, which are instrument of deed’s realization. That is the way of materialization of our ideas, or localization of States.

In the line of person activities there may be distinguish seven function’s Spheres in socium. He looks after own body, interacts with environments’ objects, try to understand other one, solves team’s goals, goals of country, and does some function within frames of states’ union and whole planet. Spheres are enumerated in order of difficulty rising, it may be sad, in order of globalizing. They are enclosed to each other. Simplify enclosing may be imagined as nesting doll and illustrated like system of process.

7 Spheres formed step-by-step in course of consciousness’ development; and man created more complex social structures. There was a little collective of tribe. Structure became more complicated as collective grew and that required corresponding control methods. Consciousness developed and little collective transformed in to city-states, princely states, and states. Some states united and unite in to alliances and federations. When level of humanity consciousness will allow grasping problems of planetary scale, there will be union of whole Earth.

Energies of Spheres functioning are not proper of human. Animals also care of own body, interact with environment and each other, make families, unite to flocks (shoals, packs), have specific natural habitat, travel and migrate on planetary scale ranges. But they can’t do all those actions consciously, it intrinsic only to human.

In every Sphere there are certain functions perform. What are functions? And what basic energies work at that?

Remember your infusion to new collective at new job. At beginning it is necessary to learn fulfilling simple orders. Than you learn planning and fulfil more complex tasks. In time a wish to realize own idea appears. Believe to own strength grows. Knowledge about collective and its workflow accumulate. Skills of forming complex processes, that includes whole collective’s mechanism, develop. And here you have to learn interacts with higher level processes.

All this steps may be termed: energies of Action, Planning, Wishing, Believing, Cognition, Creating (Forming), Co-creating (cognition of Truth). These functions may be seen as in first Sphere (developing own body) like in fifth (learning methods of state control), and in any other.

Adding examined functions to process’ functions it may be summed: person with 7 basic energies perform Shaping, Energetic, Resulting functions creating Thoughtforms, Situations, Sentiments, Deeds, Forms in 7 function Spheres. Abilities to function compose person’s character. Implementation sufficiency of thoughtforms depends on its accuracy and awareness degree. Speed of implementation depends on volume of energy (field intensity by physics terms). Greater thoughtforms require higher level of consciousness. It is pointless expect from person to create and organize team work if energy of 4-th consciousness’ level is not enough developed – they ain’t able to formulate goal of collective, make tasks and cast. Force-energy working level will raise team on its bones – tortures, struggles, conflicts, lack of joy in the life and various diseases of team members. And, of course, if stronger such line then weaker and frail collective. 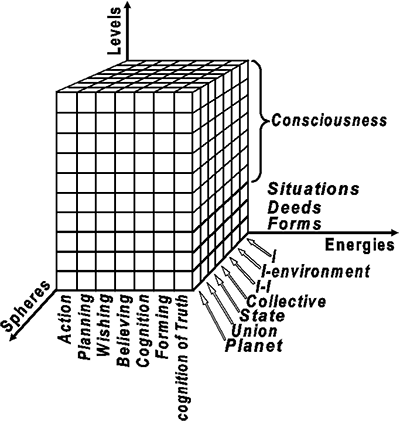 Energy-informational human’s structure may be illustrated in gnomon with basic energies, Spheres and Levels on the axes. Every simple cube performs as function, process that encloses Shaping, Energetic and Resulting functions.

Next 7 functions, or, to be more precise, fields of application, are 7 Spheres. In generalized terms Process performs the same 6 functions in all 7 Spheres. But these functions become apparent differently, and invoke different senses. Compare feels of sportsmen: feeling of own body (1st Sphere), environment (2nd Sphere), rival (3rd Sphere) and team (4th Sphere).

Every work we execute with some degree of awareness, displaying certain interest to: shape, number, participation, or opportunity to form process; but there may be interest to: change something in yourself or environment, improve relations with other, revise team, amend a bill, thinking about intergovernmental questions or planet-scale problem (global warming, ozone hole, planetary hunger or smth else). All this describes with 10 types of energy (Forms, Deeds (includes Sentiments), Situations (includes Thoughtforms) + 7 Levels of consciousness).

All aforesaid may be performed with Sympathy-partnership energies (Savity, Creativity, Unity) and may be with Force energies (Multiplication, Figmentation, Slaving). Here we have got all 36 generalized functions. And number of parameters describes person’s character that are combination of 36 functions is 6x7x7x10x3x2=17640 (“x2” is possibility of State of the same function with Sympathy-partnership or Force).

In interpretation of process in socium more handy to operate with those 36 functions, than with 17640 parameters used by psychologists, pedagogues, sociologists, politologists, philosophers and others “-s”.

Someone acquainted with oriental views and human ontology may ask about chakras and energy channel those must be opened and extended: where are they in the scheme? Answer: the same place. Let me explain.

When we examine structure of state, we can talk about existence of separate organizations, about municipality, administrations of districts and arias, about president’s administration. And we can talk about financial, juridical, economic, executive, ideological structures and ways of their interaction. But one thing is to know about existence of various structures and talk about how to they must work, actually without having the image about inner organization and functionality, and other thing – knowing from deep and from all sides of life even if small company.

The same is to chakras. We can discuss about necessity to open energetic centres and channels that must pass yin and yan. But what does mean “open”? How to feel it? What is “yin” and “yan”? Without clear framing vector knowledge corresponding to feelings we will stay on debates’ level and don’t get ability to independently change ourselves. Even controlling and purposefully working on feels without of energetic centre’s knowledge we remain blind. “I feel calm and peace in my heart”. Perhaps, that is for certain energetic Diapason, for Grasping with Savity and Running2 function at example. It is native, accustomed and easy to feel when something wrong. But what about energies of Creativity and Unity? What is going on with Realization? And with Guiding and others functions? And what is a top level working on Sympathy-partnership energies? Which of Sphere?

Summary, clear framed knowledge give great advantage. Of course there may be managed without it. Eventually a problem manifest itself, and then, willy-nilly, it have to be solved. Is not better to prevent it? Why to go bottom way, full of pain and suffering, if upper is exist? Knowledge of energy-informational structure is able to help in many life’s problems.

2 Further, Diapason will be indexed with “en” dashes, like this one: 4thCentre-5thLevel-6thSphere-Planning -Realization-Grasping-Creativity.