Most global stages on passed way of socium’s development are polytheistic and monotheistic. How they correlate with development of seven Levels of consciousness?

Stages of socium development very similar to individual consciousness development. Tendency and way of any collective (from 3-person family to states’ unions) depends on critical mass of its members.

On the first stage, while develop first Level, persons, of course, unite1 in some collectives, mostly by clans, but main interest is learning of own body trying to survive and save itself. Elements of environment serve to this goal too mastering interaction a body with environment.

On the second stage critical mass of society take an interest in natural forces, apprehend environment in capacity of active subject. At this moment socium (through most advanced persons) receive a textbook of life, revelation in the form of polytheistic worldview.

While on the second stage men actively develop Grasping of nature laws, than on the third stage man learn to use natural force in own goals for satisfaction of needs – actively develop Realization of knowledge. In the same time satisfaction of needs of one knocks to needs of other, that results to necessity of understanding other person. But ability to create something it is very captivating deed. Infatuated with ability to realize, person forget about function of Grasping and on energies of Multiplication, Figmentation and Slaving rolls down on the way of insatiable satisfaction of ‘needs’. Real material human needs are little, it is not so hard to satisfy them, but passions are insatiable. So, in development of third Level person begin to aware interaction with its own kind, and this need in the end of the third stage transforms to passion. Leo Tolstoy sad in “Circle of reading”: “Wishes that most seized us – is lustful wishes, such wishes that never satisfied, and the more are satisfied the more grow”. Good illustration of passing by socium the second and the third stage of development is rising and falling of Roman Empire, where ending of their time was signified by critical mass had been “massively” involved in satisfaction of passions.

At the same time gradually humanity is prepared for moving to new, the fourth stage of consciousness development; prophets, which sermonize advent of monotheistic teaching, birth. Sprouts of monotheistic consciousness step by step destroy old ossified pagan form. III AD was marked by most furious resistance of old forms to the new worldview. In this time was shed a lot of blood, but at the same time this age had given more personalities (than previous) whom descendants canonized.

Image reverse situation, when several creators begin to form single process, and every with corresponding image. For example, ten sculptors start to model one sculpture with each own project. What we will obtain?

The task of monotheistic teaching were giving critical mass an understanding of Laws of collective.

Mastering the Second Worldview and somehow2 understand principles of state forming man begin to impose own understanding on other states: crusades, development of America, British conquests. Substantially it had been pursued self-interested goals.

While monotheistic worldview grew, states borders where stabilizing and colonies where freeing from influence of parent state. Russia, having mastered monotheist’s ideas, was able to free themselves from Mongol-Tatar dependence. Process of active mastering of Christian ideas significantly expanded the list of Orthodox’s saints in XI-XVI centuries.

Below, you can see diagram of making forth and fifth stages of development that good illustrated by birth frequency of saints and researches, respectively, from XX BC to XX AD. 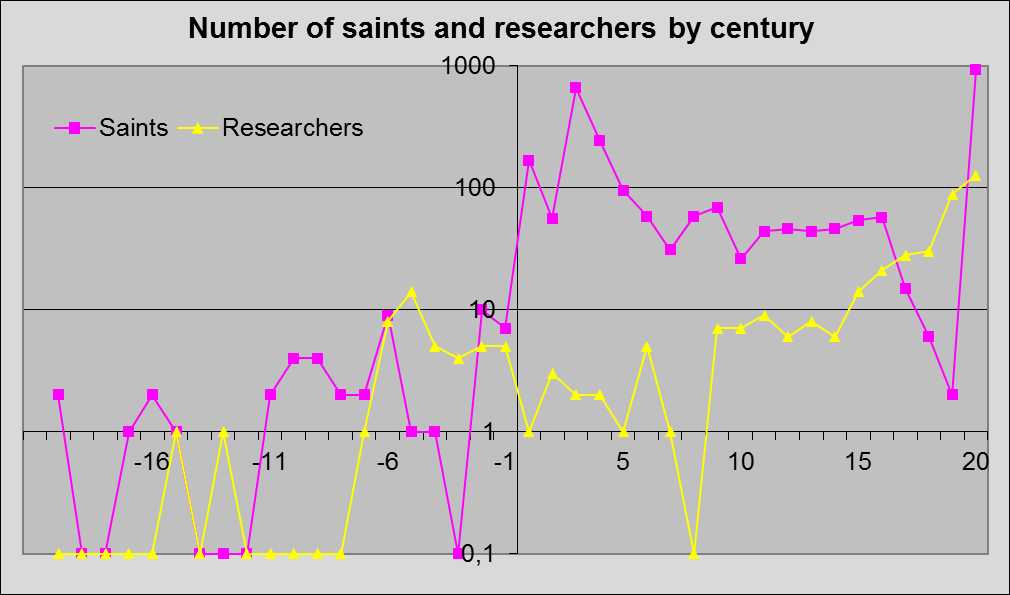 Squares are birth rate of saints (canonized by Orthodox Church), triangles – of researchers in period of XX B.C to XX A.D. Number of saints and researches is represented in logarithmic scale at vertical axis. There is possible to add and adjust numbers. But common character, for sure, will not change.

Relatively small number of researchers of this period where forerunners of fifth stage of development. In the end of the forth stage of development (IX-XIII centuries) number of researchers noticeably grew. The late Middle Ages is beginning of the fifth stage. You can see sharp growing of researchers’ birth rate in XIII age, and fall in XIV because of wave of disasters such as Great Famine of 1315–1317 in northern Europe (with extreme levels of crime, spread of diseases, mass death and even cannibalism), march of Black Death, Peasant’s Revolts in England and France, Hundred Years’ War. Those events were negative consequences of unrestrained pursuit for results, and they tell about finishing of the forth stage of development.

Besides, if in ages before Christ forerunners of the fifth stage where treated pretty mildly, than in Middle Ages monotheistic church burnt them at the stake. But life get one’s way, and from XV century rate of persons involved in research activities stable grows up.

The period from XV till XVII may be consider as beginning of scientific-technical revolution. It was a period of theoretical preparation for high jump. Those theories led forward the Industrial revolution that is a sign of forming 5th stage of consciousness development. Various inventions allowed to pressure the time, things were handled months now where taking a day. For example – creating of spinning machinery in Great Britain. For a thousand years spinners made their work with hand spinning, but for short period from 1735 to 1764 innovators created spinning jenny and to 1790 year were made more than 20 thousands spinning machines.

Putting in order an accumulated knowledge, structuring them spill into a creating of various scientific disciplines and run the rapid technical progress. Pay attention to graph of researchers’ birth rate at XIX-XX centuries. Development of science, engineering and industry can’t be happened without of changing socium. All those rapid changes were illustration of 5th stage.

All history of consciousness’ development talk about constant globalization of social processes. In the end of XX century globalization process spread to planetary level. Researches of quantum mechanics have gone to conclusion about existence of a single source of reality. In social sciences new developments, that examine socium at planetary-level positions, actively show up: such as geopolitics and mondialism.

By the way global scale problems like ecology situation, terrorism, worldwide diseases, starvation, cataclysms and perversion of moral values become obvious and people puts hopes to science, to power of technology as if it is magic wand. Yields of technic progress turn to golden calf.

Those events indicates about forming the “third breath”, about intention of humanity to understand unity of all life, about inability the Second Worldview to ask for urgent questions, about advent of Third Worldview.

Well, we have the changing of even and odd stages of consciousness’ development. Even stage is obtaining theory – an according worldview. Odd stages is putting theory into practice. Consequently, the six stage brings the Third Worldview.

Graphs of birth illustrates that birth’s spikes, those signify coming of new, are not all of sudden, but long before it individuals had been showing-up and laid the foundation of future.

Judging by crisis of human society, we already stay on threshold of the six stage of development. By this, there must exist theoretical precondition of Third Worldview. What nature of the worldview will be? Where a source of it?

1 It goes without saying that leaders of collective stay on higher Levels (Law of Process multiplicity apriori provide hierarchy at any stages of development).

2 Question of Force and Sympathy-partnership energies.