What is the Process and Processes’ field, and how processes interact with each other? It will be considered in this part.

In order to talk about process’ framework with point knowledge, we will consider well known process – each person to his taste. Take any familiar deed: tidying up, driving, constructing, teaching, sunbathing, shopping or whatever you want – and we will try to allocate main process’ function.

Every process is formed properly for getting certain result. I.e. – idea is formulated, plan is scheduled and Realization1 begins. Mostly we do a realization. And more often we don’t understand what for, notwithstanding motive always presents; to get a bonus, to please boss (captain, parents, teacher) or to do because you are not black sheep. It makes a great difference when we know what for we do, when we went through idea, when we sensed it and when an interest has occurred to given deed, then a result will be greater! In such case there is no need for pushing and penalizing – we all do in our best. Moreover, we will have learned something because of intention to best, because on every milestone of realization we grasp and interpret gotten result and collate to idea that we have sensed before. Ok, there we have Grasping function – pair to Realization.

How often do you think about this function? If “yes” – how often do you encounter with goal-directed development of Grasping? We are being learnt to seek after result while pressing Grasping function: idea is not brought to mind, interest is not roused, and time for experiments is got away – it is need quick, quickly, and quickest. Shape can be made quickly, but always has no time for meaning this shape.

While grasping information we put on Analysis function. After accumulating enough analysis’ results we generalize (or Synthesize) them and make certain conclusions. That’s way process of our development goes on. That’s why it talks way more important than result.

While we realize process and stream to goal, we all intenseness and abilities direct to single point for accomplishment, and anything else has no interest to us. Often we forget to keep track running of process, like call “nothing see, nothing hear”, we only actively move forward. Senses are antipodal while Grasping – there as if we have frozen, pricked up one’s ears, half-opened mouth, ‑ fully deep to attention. Have you felt distinction?

While we analyse, we collect separating instances, and arrange them on shelves, sorting out accumulated information. After we observe all this bookstand and try to understand something new – and begin to see clearly, to see whole image, ‑ and great idea is dawning upon us! There is like learning individual trees in forest and whole forest at the same time.

At know imagine that you lie on sofa or take bath, and you don’t want to think or, even, to stir a finger – full laziness. And another situation – you are relaxing, but suddenly impatience to do something excites, and every muscle is filled with power, you essence is single-minded by some purpose. It is Runny energies feel. You ready to jump up, run, and to do something, performing impetuous activity. But havoc will be if you don’t control this feel. A plan must be formed before, and it is the easy the more balanced feelings you have. Remember sense of cognition expanding, when you take under control different facts, simple and complex stages of work, when you systemize and planning direction for action’s force. That’s way energies of Guide and ability to systematization are reveal.

Well, all process’ components have been analysed – three pairs of functions: Grasping and Realization, Running and Guiding, Analysis and Synthesize. And corresponding energies that we feel while activities of functions. Next we must integrate all to one and create whole picture that give us solid feelings of process.

Lets draw this picture. Functions will display in triaxial system as vectors’ pairs that cross in a middle. 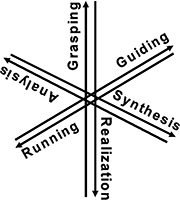 Each pair is responsible for two functions. At first look they are opposites. Realization requires focus on concrete aim; Grasping requires readiness to accept set of different information. Running express in action; Guiding express in reflection. Analysing engages with details, Synthesis engages with single whole. What can unite those opposites? It’s energy of unity, of course. Three pairs compile triunity of process. 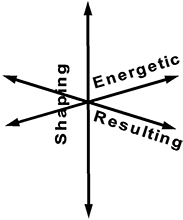 Process may be illustrated in more generalized image. Grasping and Realization functions form Shaping function. Goal of process appears in our consciousness as some shape that corresponds to idea, and that we seek to realize. But every work, every deed, action require energy. The Energetic component formed by energies of Running and Guiding functions. Without Runny energies of active participants a work can’t be able to move. And there is no moving to goal without director’s Guide energy – only active chaos will be. Realization of process always leads to some result; that means Resulting process’ component formed by Analysis and Synthesis functions. Generally, Analysis and Synthesis aren’t necessary output of human mind. For example, take a car: working of modules is analysis, and moving car as integral whole is synthesis.

Gyroscope’s process also has three vectors: intrinsic impulse moment (Shaping), outer force (Energetic), and moment of force (Resulting). Let me make clearer for those who didn’t like physics in school. There is the same gyroscope effect to bicycle wheel. Spinning wheel acquires gyroscope’s features. Forming force emerges and helps evade falling. If you haven’t enough experience on bicycle riding or don’t clear feel this moment, you can carry out simple experiment. Place bicycle on rear wheel and ask someone to spin up front wheel. At the same time impulse moment will be set along axis’ wheel. Try to rotate handlebars – it is will be outer force directed perpendicularly to axis’ wheel. And wheel will show certain wilful: it twist to perpendicular direction of outer force. This is effect of gyroscope helps not fall from two-wheeled and even single wheeled bicycle.

While trying to understand and to feel above examples, recalling own moments of life, thinking about process pattern, most probably someone have felt certain discomfort about all this things and, may be, formulate the question: in what sense goal of process and result have different axes? Turn outs that goal don’t coincides with result? Well. You know phrase similar to ‘The way more important than the end’. The question is in interpretation of word “result”. Someone see result – meaning of life – in building house-home, gaining good money, having socking great yacht, obtaining endless life’s pleasures. – A shape formed by our forces. But result of any process that agrees with purpose, sense and meaning of life – is development, our consciousness evolution that going only in the way. Remember your games in sandpit or look to kids. Carefully look. How passionately they build a sandcity! Only try to interrupt this process or to destroy theirs creation! Eyewater and grievances will be. You think built shape is so important for children? If so, why they will raze it with owns hands very soon? Because of the result of process were thoughts, understandings and feelings of creation’s time. Grievances rise because of interrupted process of grasping and findings making. When a process can’t give something for development, then built shape become useless. The same way to all our life that is a game. We create various shapes. While create and use them we are learning and understanding. And then, when there is no need, we discard them.

It is necessary to add, that process forms along energy path – with twist. Any process may be demonstrated through cycling. But, only, cycle duration may have such parameters we can’t overwatch. Man curls in deeds. Car’s wheels rotate, and with some periods we feed it. Planets, galaxies, elementary particles, electromagnetic field rotate. Summer – autumn – winter – spring and again. Even motionless stone under periodical nature force turns to sand. And man’s development occurs with correlation to certain cycles.

In the end of thoughts. Imaging process by the way of three pair functions is quite relative. Every function is present oneself as process and including other functions as well. And dividing process to components helps to understand essence of event.

E.g. – light. Some time ago a man picked out certain colours from white light for drawing. Then he divided light on components: represented it through electromagnetic wave, learnt to measure parameters, to describe a penetration through various mediums with formulas. At now is hard to imagine life without cinema, laser technologies, microscopes, and goggles.

Hitherto we just formed process. And now, time for learning and describing processes with mathematical language is come.

Deep understanding of laws’ process’ forming someday will help human to sort out in its deeds on Earth. And, first of all, what is good and what is bad.

1In our case Realization and verb “realize” will be used only as strict synonym of implementation. Rare it’s may be used as “understanding” or “awareness” meaning form, like in ‘Do you realize what you do?!’