If we begin to look outer process with full field view of our awareness, we will see infinity line of processes includes single man, group, state, a planet, a planetary system and a galaxy. If we try study in depth to process’ structure we also will found whole system of inner processes are structured with certain manner: man, organs, molecules, atoms… ‑ only protein-nucleic acid body is instanced, but don’t forget about energetic or psychic bodies. Space of processes is eternal!

Like we have figured process as octahedron, so process’ space will be figured full of octahedrons in larger octahedron. For exploration of question we will take a 2D picture with octahedron’s sections. (Full 3D image of process’ space you may see on separate article with schemes that will be added later) How cross-section may be interpreted? 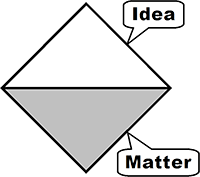 Every process may be imagines in form of multiprocess multilevel structure. Such way a space will represent as single process composed with set of octahedrons. Introduced two-dimensional scheme is cut of three-dimensional figure also containing octahedrons set.

Such scheme already may be analysed and concluded. Of course, analysing may be variable. Centre simple process may be examined as core and outer processes as manifestation of its development that complicates a structure. It is like annual rings. Or successful developing company.

Another one – upper part as process of idea generation, and bottom as process of idea materialization. Let’s take design-engineering department with pilot production. Top of octahedron is constructors under the direction of chief designer. They work out general idea, make modules and details’ draft. Bottom – production – is under the direction of chief engineer work out manufacturing processes’ and launch a product. And in result we have certain thing depending from process’ Shaping component.

Or take a hierarchy of all creating process. Topmost octahedron is a chief designer. Below – his assistants, mains constructors according to areas. Then – heads of corresponding sections and sectors, after then – ordinary constructors. Bottom process part mirrors upper. Bottommost – chief engineer, then – his assistants, heads of departments, workshops and sections, after then – product engineers and workers.

Ok, we are interesting in common regularities of process interactions.

At first have a good look to a vertical interaction. Pay attention how upper process interacts with lower. It is not with vertex connection, but with edge connection – they have Realization and Grasping on the same line. Realization of upper process affects on Grasping functions of lower-level processes. Its ideas process materializes in form of certain tasks that act as ideas for lower-level processes. Thereby a matter and a product of current level is idea for lower.

The scheme of idea’s materialization is all-understandable and ideally works on practice. Chief designer instructs main constructors, those – heads of sectors; ordinary constructors make draws; then draws are passed to chief engineer…, workers produce modules and assemble final product. Break a chain – and nothing get.

In practice Realization of upper process fairly often pass out Grasping lower process; simply process’ manager doesn’t include inferior’ consciousness trying affect only to its Realization. As a result laws of sympathy-partnership break and process is formed with a force. With sympathy-partnership manager brings idea to inferior and nothing more. Only results control and feedback. How to do a work an inferior determines oneself. And often know better. If don’t – learn. Thus self-sufficiency is formed, creativity develops. There is a main point of monotheism: one process – one creator (director, the Maker, God). What will come out if ten artist sculpt one sculpture; each with own view to the idea?

Examination of questions, tests and error correction require time. What if there is ‘no’ time? Manager know better than inferior and begin to boss around how to do. But there is the question – what exactly manager know? Answer – only main idea and doesn’t conditions of work. Conditions of cooking, for sure, inferior knows better.

Think about it: how many laws of creativity and life are broken. A process that must be formed by inferior is interfered by manager – and principle of single creator is breached. Inferior, actually, moves away from handling of own process – and, of course, loose interest, become passive and awaiting command. In short words – turns into bio-technical robot. Manager obtain headache in the form of constant spurring on an inferior. It shorts time for carrying out own functions. In sum both get bunch of illness: inferior because of losing interest to creativity and ability to developing, i.e. sense of life; manager because of working for oneself and for other man. Result of process will have not look well and time will be spent more – if don’t with present case, than in next for sure!

Those situations, when process is implemented in creativity unity of all participants and inversely with principle “I am a boss and you are dunce”, may be compared with: wheeling heavy carriage downhill with little guiding and decelerating and inversely pushing it uphill.

Well, we have looked vertical processes’ interaction, different level’s interaction. Let take a good look to interaction of one-level’s horizontal processes. Main feature is ability’s complementarity between neighbouring processes. Each specializes in something, and thing that isn’t able did by single is possible for solid team. What does mean solid? Solid with common idea, common interests, intention to do best an assigned task.

What sorts of ideas are capable to solid a team? Viewing various ideas we inevitably will come to triunity: material ideas and idea ideas that unite under “development” notion. Intention of getting material welfare is reduced to money raising; idea welfares – to understanding and learning.

Is it possible to unite collective with money idea; is it possible to create unity process based on such idea? Idea can unite on conditions that take into account interests of all members; when interest of everybody accords to common goal and with each other. But total profit is always limited. And (take hyperbolizing situation) if every strive for maximum and more unlimited earning, than unity will be very fragile – there are no teammates will be, but rivals. With such way long-time process can’t be formed.

Idea of new experience, new aim for applying own force that opening new horizons of knowledge and progress – such idea always raised masses to deeds. In so doing goal of forming collective and goals of participants of process are defined by forwarded idea. Intention of every team member to experience a new and to learn something may be satisfied so strongly as strongly an idea. But there are always hidden rocks: unreasonable process’ ideologizing and lack of material incentive in results lead to disorganization of process.

Therefore, for well running process (of development) it is necessary optimal combining of idea’s grounding and incentive in material results.

What defines interest of person, his abilities and intentions? Not from the outside, not outer circumstances or external influences, but from within. What processes and energies within define behaviour? There is no much sense to talk about abilities of others that don’t dependent to us. But ‘loved one’ we able to change. We only must have certain knowledge how to and what with operate to.